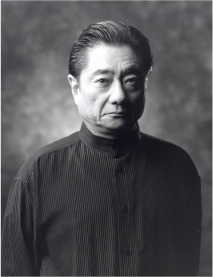 Yutaka Saito was born in the city of Otaru, Hokkaido in 1947. The family moved to the Saitama prefecture city of Asaka near Tokyo when he was 12. As a senior high school student, Saito was deeply impressed by a wood-constructed school building located nearby that had been designed by Antonin Raymond, and decided to be an architect. After graduation he pursued his study of architecture independently. His first architectural work was his own house, built when he was 21. In 1970, he founded Yutaka Saito Architect & Associates in Tokyo (current Yutaka Saito Architects Inc.)

In 1986 Saito received the Japan Institute of Architects Prize for Best Young Architect of the Year for Rurururu-Abo (1980), a ceramic artist’s studio-cum-house built in central Tokyo. He had made the theme of this work “a house where you can feel breezes like those passing through a Zen temple garden, in the midst of the city.” The screening committee for the prize praised the design for its “Japaneseness,” expressed in a highly abstract way, brilliantly digested and reconstituted in a contemporary building.

In 1992 Saito won the Isoya Yoshida Memorial Prize, the most highly regarded architectural prize in Japan, for the Kojitsu-kyo (lit., “good day house”), an antique art dealer’s house built in Tokyo (1990). Hailed for its “spaces as if out of a picture scroll,” this house represents a fusion of the traditional techniques and materials of Japanese architecture (e.g., the silver-foil coating on the steel dome ceiling) and high technology (e.g., parts using curved steel gas-tank plate made by incorporating cross-industrial technology). This fusion made possible the optimal and effective use of the typically small plot of land available for urban dwelling to fulfill the functions of modern everyday life, while at the same time aspiring to design spaces responding to the Japanese sense of beauty.

Yutaka Saito’s works are situated not only in Tokyo but scattered throughout Japan, from Hokkaido in the north to Yakushima Island in the south. At countryside sites surrounded by nature, his designs make the most of surrounding terrain, incorporating his interpretations of local natural features, e.g. the House on Yaku Island and Miharashi-tei. The Mangetsu-kyo (lit. “full-moon house”) in the city of Sapporo, Hokkaido (1996), for which Saito was awarded the Architectural Institute of Japan Award in 2000, was built using locally grown ash wood and diatomaceous earth. The theme of the house being the “full moon,” he set a high window in the direction of the moon’s orbit through which the full moon can be seen every month. This design approach was not adopted for this house alone. Incorporating the movements of a celestial body, like the sun or the moon, into the design and determining the direction of a building and openings in relation to that movement have been important themes for Saito from the outset of his career as an architect. One of the current works designed in line with these themes is the House of the Water Patio (2017) in Sapporo.

Shunkyo (“morning glory house”), in the central part of Tokyo (1997) is a house Saito designed for a book designer who had visited him and said, “I want you to revolutionize the house.” In this work Saito explored ideas for a dwelling unfettered by all conventional concepts. With the site in a closely built-up area, he devised a concept of space that is “clopen” (closed-and-open). Incorporating no conventional square windows, he created instead domed space using 12 curved steel sheets in a flower shape, skewed so that light enters through the slits between the sheets as well as from top lights. In contrast to the steel on the exterior, the interior walls are finished with paulownia wood, which has been used in Japan in craftwork such as kimono chests since ancient times. Shunkyo was a bold adventure in creating a new kind of living space by combining high technology and craftsmanship, contemporary and traditional materials, and state-of-the-art structural techniques.

Among collection of his architectural works are Gendai no kenchikuka shirizu Saito Yutaka [Contemporary Architect: Yutaka Saito] (Kajima Shuppankai, 1994), and Yutaka Saito: Architect (TOTO Publishing, 1998).
His essays were compiled in a collection entitled Strong (1991) and a dialogue with photographer Yukio Futagawa was also published under the title Kenchiku no essensu [The Essence of Architecture] (A. D. A. Edita Tokyo, 2000).